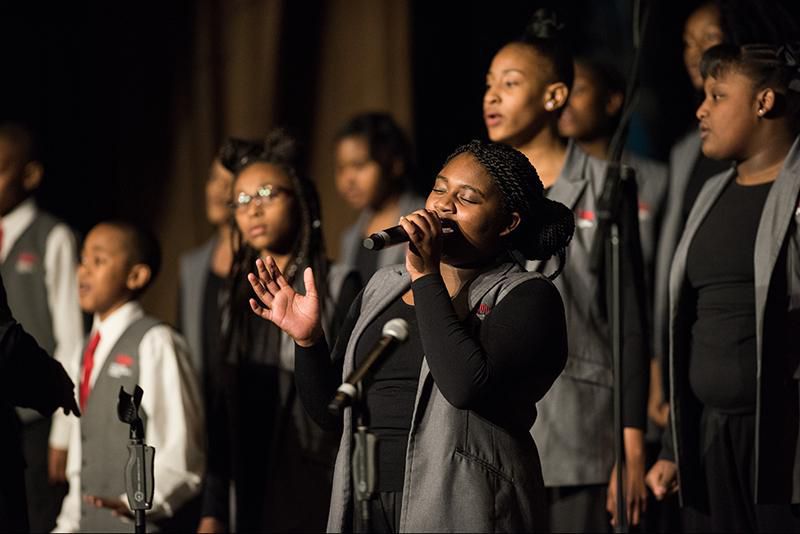 The Chicago Children’s Choir is also celebrating Black History Month through song with its annual concert, but this time on a digital stage: Facebook Live. (Megan Bearder)

From online exhibitions to panel discussions, here are more than a dozen events hosted by museums and other cultural institutions

Because of the Covid-19 pandemic, many museums and cultural institutions around the country are opting to shift their Black History Month line-ups for the month of February from in-person to online-only affairs. The result is a creative curation of art exhibitions, concerts, panel discussions and other events designed to celebrate, but safely through virtual means. Here are more than a dozen (free!) events to mark on your calendar.

The National Museum of African American History and Culture in Washington, D.C., is hosting a comprehensive exhibition focused on the life of Pauli Murray, a Civil Rights activist who was also the first African American woman ordained into the Episcopalian priesthood. “Pauli Murray’s Proud Shoes” takes a genealogical look at her family history, from the 1834 bill of sale for her great-grandmother to details about her grandfather, a soldier who fought in the Civil War.

Across the country in the Bay Area, the Oakland Museum of California examines the Black power movements in California with “Black Power,” a show comprised of photographs, posters and other artifacts beginning with rallies led by the Black Panthers in the 1960s to more modern-day Black Lives Matter demonstrations. In keeping with the theme of activism, the African American Museum of Philadelphia plays host to “Through His Eyes,” a collection of black-and-white photographs of local youth activists who participated in the Civil Rights Movement. Meanwhile, the American Writers Museum in Chicago has uploaded its popular “Frederick Douglass: Agitator” exhibition as an online show that explores the lifetime of the esteemed abolitionist, writer and statesman through handwritten manuscripts, portraiture and more.

The National Afro American Museum and Cultural Center near Dayton, Ohio, is offering curator-led video tours of two of its current exhibitions. The first, “Queens of the Heartland,” looks at 30 influential black women in Ohio history, including Fanny Jackson Coppin, a missionary and educator, and Mary Church Terrell, a suffragist and writer. The second is “The Art of Soul!,” a national juried art show featuring works by more than 20 contemporary black artists that focuses on the impact humans have on one another, a particularly pertinent subject during the current rise of racial unrest. And lastly, Casa Afro, an art gallery in Puerto Rico, has created a 3-D tour of its latest exhibition, “NEGRO/A/X,” which features contemporary pieces of art that tell the story of the many different African influences around the island.

Throughout the month of February, the National Archives in Washington, D.C., will be offering a full schedule of talks and panel discussions for Black History Month. One event in particular that’s worth noting is “The Black Family: Representation, Identity, and Diversity” (February 25, 7 p.m. ET) which will focus on black family life throughout history, literature, the arts and social policy. Hosted by Ida E. Jones, an archivist at Morgan State University, the event will include panelists Alison Parker, author of Unceasing Militant: The Life of Mary Church Terrell, and Darius Young, author of Robert R. Church Jr. and the African American Political Struggle.

On February 23, the Cooper Hewitt, Smithsonian Design Museum in New York City is hosting a panel of curators discussing the 20-year career of the late fashion designer Willi Smith, who was known for his affordable yet avant-garde designs. New York’s Museum of Food and Drink has a menu of events on the African diaspora on tap, including “Growing Rice: A Migration Story from Seed to Plant” on February 16 and “Coastal Roots: Tracing the History of Ancestral Farming and Cooking in Georgia” on February 23.

On February 18, the California African American Museum in Los Angeles presents “In Conversation: Quincy Troupe and Erin Aubry Kaplan on Miles Davis,” a deep dive discussion on the famed jazz trumpeter. The Birmingham Civil Rights Institute in Alabama will also be presenting a slate of events, from an interactive town hall discussion about systemic redlining on February 18 to a genealogy 101 lesson with experts on February 22. And lastly, on February 19, Chicago’s Field Museum presents a rare examination of its famed “Africa” exhibition with a panel featuring curators and designers who launched it in 1993.

Two separate Wikipedia Edit-a-Thon events will be focusing on boosting recognition for black American artists and STEM professionals alike. The former will be hosted by the Smithsonian American Art Museum and the latter by the National Museum of African American History and Culture and blackcomputHER.org.

Museums aren’t the only cultural institutions shifting their Black History Month offerings to virtual events though. Now in its 35th year, the Brooklyn Academy of Music in New York City is hosting its annual “Brooklyn Tribute to Martin Luther King Jr.,” an hour-long concert featuring songs, poems and spoken-word tributes dedicated to the much-lauded Civil Rights activist and Baptist minister available through February 28. Performers include Sing Harlem! and Grammy-winning musician PJ Morton. The Chicago Children’s Choir is also celebrating Black History Month through song with its annual concert, but this time on a digital stage: Facebook Live. The one-time event takes place on February 25 and will include performances by youth singers as well as Grammy-award winning artists Lisa Fischer and musical ensemble Ranky Tanky.

Back in New York City, Village Preservation will be hosting a different multimedia event on February 23 when tour guides Derrick Edwards and Eric Chase embark on “Black Bohemia: a Virtual Village Walking Tour,” which will take viewers through the city’s popular Village neighborhood by following in the footsteps of famous black artists who called the area home, including writers Alex Haley and Audre Lorde, playwright Lorraine Hansberry and novelist James Baldwin.