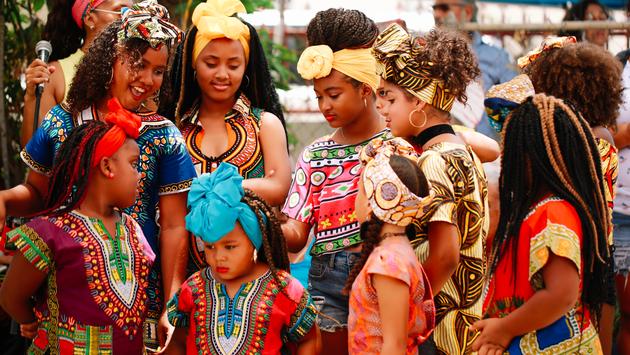 Puerto Rico’s 16th, 17th and 18th century colonial periods are responsible for much of the island’s prominent European influences.

Yet lesser-known, but no less significant, are the cultural contributions of the hundreds of thousands of Africans who arrived in the territory via forced migration during the same period.

The island’s African legacy “manifests itself in all aspects of the daily life of the Puerto Rican today,” said Dr. María Elba Torres Muñoz, director of the Instituto Interdisciplinario y Multicultural, General Studies Faculty at the University of Puerto Rico.

“It is felt and lived in their songs, in the dance, their food, their bodies, their way of speaking, their vocabulary, the way of loving,” said Dr. Torres Muñoz. “Products and food were brought from Africa on the slave ships [and] due to the climate and forced labor, these foods grew in the country and became part of the enslaved Africans’ diet.”

The same influences are found in the island’s performance arts, said Dr. Torres Muñoz. “Music has always been intrinsically connected to spirituality, uniting the human with the invisible, or the divine. Those forces today persevere in Puerto Rico,” she said. “All African history on the island has been a history of resistance in keeping our Afro-descendant traditions.”

Contemporary visitors can trace Puerto Rico’s African influences through various sites, activities and exhibits that focus on the territory’s fine art, gastronomy and live performances drawn from its African heritage.

“African heritage is at the core of the continental American experience,” said Dr. Torres Muñoz. “From North America to Central and South America and the Caribbean, our African descendance is the thread that unites us to all the nations of the Americas.”

One of Puerto Rico’s newest African art exhibitions, NEGRO/A/X Art Exhibit at Casa Afro in Piñones, highlights 20 Afro-Puerto Rican artists. The exhibit “[Takes] the pulse of an Afro-Caribbean aesthetic representing us and shedding light on our experiences, dreams, and conversations,” says Celso González, an artist and the exhibit’s curator.

“The group of artists on the exhibition are a multi-generational group currently at different stages of their career, providing depth and diversity to the artistic discussion on our African descent, culture, and Afro Boricua point of view,” Gonzalez added.

Located within a short drive of the San Juan colonial district, Loiza also features Puerto Rico’s largest Black population, a legacy of its 16th-century settlement by Yoruba people from the West African countries of Nigeria, Benin, and Togo. Loiza is celebrated for its Afro-Puerto Rican music, art, dance and culinary traditions.

Puerto Rico’s Afro-Puerto Rican heritage include breathtaking demonstrations of the Bomba, a rhythm played by two or more drums guided by the dancer’s feet. Visitors can learn about the dance at Don Rafael Cepeda School of Bomba and Plena, one of several studios where guests can learn about African-influenced dances and traditions.

“Whether the Puerto Rican society is aware or unaware, or even accepting of this fact, our culture and personality are deeply rooted in Afrocentric elements such as family, spirituality, and celebration through dance and song,” said Dr. Marta Moreno Vega, co-founder of Corredor Afro and founder of New York’s Caribbean Cultural Center and African Diaspora Institute.

“The creative aspect of our culture is reflected in our typical Puerto Rican accent, in salsa, bomba, plena, reggaetón or trap music,” said Dr. Moreno Vega. “Our Afro Caribbean sounds travel around the world as a testament to our local and international influence.”